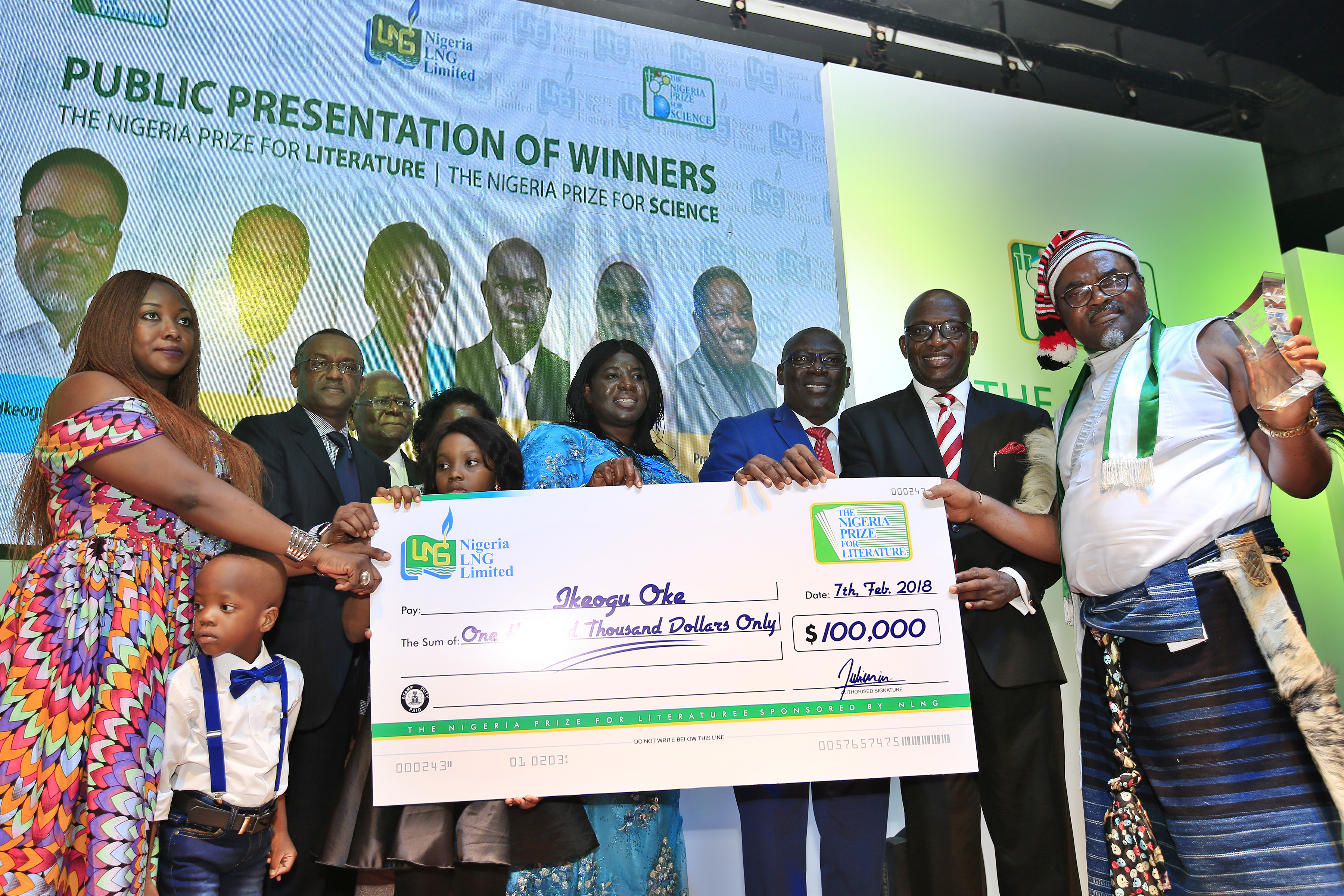 And has also announced that 2018 literature competition would be on Drama while the science prize theme is Innovations in Electric Power Solutions.

The public presentation which took place in Lagos recently , came with a cash prize of $100,000 to the author of the winning entry for The Nigeria Prize for Literature, The Heresiad, Ikeogu Oke, , while joint science prize winners Ikeoluwapo Ajayi, Ayodele Jegede, Bidemi Yusuf, Olugbenga Mokuolu and Chukwuma Agubata were awarded the Nigeria Prize for Science, with a cash prize of $100,000, split evenly.

The science prize sought to find solutions to malaria through its theme for 2017, Innovations in Malaria Control.

The joint winning entries for the science prize were “Improving Home and Community Management of Malaria: Providing the Evidence Base” by Ikeoluwapo Ajayi, Ayodele Jegede & Bidemi Yusuf; “Multifaceted Efforts at Malaria Control in Research: Management of Malaria of Various Grades and Mapping Artemisinin Resistance” by Olugbenga Mokuolu.

The 2017 cycle of the science prize ended a seven-year drought of winners. There had been no winner since 2010.

Speaking at the occasion , Tony Attah, Managing Director and Chief Executive Officer of NLNG, said “The question is often asked, why Nigeria LNG Limited chose to honour writers and scientists despite its huge basket of Corporate Social Responsibility programmes that include the provision of roads, light, water and wide-ranging education intervention scholarship schemes.

“Our answer is very simple. No business can exist in isolation and be sustainable. Just like the adage says, “If you want to go fast; go alone, but if you want to go far; go together”. And for Nigeria LNG Limited, as a company, we have chosen to walk together with Nigeria.

“In Nigeria, we have the intellectual capability, we also have the resources; what we need is the will, and together we can all continue to progress the reputation of Nigeria in these spaces,” he added.

The Deputy Managing Director, Sadeeq Mai-Bornu, also remarked: “The Science and Literature prizes have come this far because stakeholders, especially the advisory boards, the panel of judges and our very distinguished guests have shown rare commitment towards making the prizes a success and one of the most prestigious initiatives of its kind in Africa.

“It is important to highlight here that Nigerian Scientists have continued to demonstrate that they can defend their space against the best anywhere in the world. So we look forward to more entries to provide solutions to issues classified as Nigerian problems in our subsequent competitions to enable us actualize this lofty ambition to speed up Nigeria’s socio economic advancement,” he said.

Accepting the award for Literature, Oke said: “In a world in which we do not always get what we deserve, and fortune does not always favour the most qualified or hardworking, I think we should all feel humble and appreciative for any success we achieve. This, besides happy, is how I feel as the recipient of this honour. To Nigeria LNG Limited, the members of the Advisory Board of the Nigeria Prize for Literature and the award-giving judges, I say, “An award-winning poet salutes you!”

The winners of the science prize also commended NLNG for instituting the prize and urged the academia and innovations to have more interest on the prize to showcase Nigeria’s talent.

The Nigeria Prize for Literature has since 2004 rewarded eminent writers such as Abubakar Adam Ibrahim (2016, Prose) with Season of Crimson Blossoms; Sam Ukala (2014; Drama) with Iredi War; Tade Ipadeola (2013; Poetry) with his collection of poems, Sahara Testaments; Chika Unigwe (2012 – prose), with her novel, On Black Sister’s Street; as well as Adeleke Adeyemi (2011, children’s literature) with his book The Missing Clock.