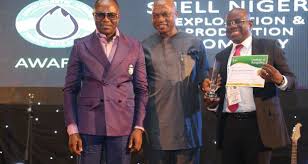 The in-country Subsea Tree Refurbishment feat by Shell Nigeria Exploration and Production Company (SNEPCo), drew a deafening applause on Monday night as it earned Shell Companies in Nigeria the Best Performing International Company in Technology and Innovation at the awards night of the maiden

edition of the Nigeria International Petroleum Summit in Abuja. The state-organised event was attended by Nigerian and international industry leaders.

SNEPCo pioneered the in-country feat and achieved significant savings in the cost of the subsea equipment led by Nigerian engineers. A Subsea Tree is an arrangement of valves and other components installed at the wellhead to control and monitor production flow and manage fluids injection. SNEPCo embarked on a Tree Refurbishment initiative in 2013 to ensure timely delivery of the equipment at lower cost for the Bonga Phase 2 project, an in-field wells delivery and hook–up programme within the Bonga Field which has been in execution since 2007.

On hand to receive the award presented by the Minister of State for Petroleum Resources, Dr. Ibe Kachikwu, were the Country Chair, Shell Companies in Nigeria and Managing Director of The Shell Petroleum Development Company of Nigeria Limited (SPDC), Mr. Osagie Okunbor, and the Managing Director of SNEPCo, Mr. Bayo Ojulari.

An excited Okunbor described the award as a recognition of the pioneering role of Shell Companies in Nigeria in local capacity development and Nigeria content. “We are pleased that this feat has continued to receive recognition within and outside Nigeria. Beyond cost consideration, we were also looking to indigenise the know-how so that Nigerian engineers can acquire the necessary skills,” he said.

Speaking on the award, Ojulari said, “This is a success story not only for Shell but for Nigeria. The first Subsea Tree under the programme was installed on schedule in May 2015. This was the first of its kind re-using a Subsea Tree fully stripped down and refurbished locally in Nigeria, with all of its original functionality restored.

“The scope of work entailed the retrieval of the Subsea Trees for disassembly, repair and rebuild following procedures developed by the Original Equipment Manufacturer (OEM) to international standards and codes. The work was done at the OEM/SNEPCo logistics base at Onne in Rivers State with Nigerian engineers and technicians playing key roles. The quick turnaround of these Trees has helped to increase oil production in the Bonga field. The expenditure on this work in Nigeria aligns with the cost of similar Subsea Tree refurbishment in Europe. We have since sustained the in-country refurbishment.”

SNEPCo saves about $6 million for every refurbished Subsea Tree, and this is delivered within 15 months as against 36 months for newly manufactured ones.

SNEPCo helped to create the first generation of Nigerian deep water professionals through the Bonga project which started production in 2005, as Nigeria’s first oil and gas production project in more than 1,000 metres of water. The project was expanded with further drilling of wells in Bonga Phases 2 and 3 and through a subsea tie-back that unlocked the nearby Bonga North West field in August 2014, which has peak production of approximately 60,000 barrels of oil equivalent a day. Bonga Phase 3 achieved first oil in October 2015.