Indonesia mine collapse: Dozens buried by landslide in Sulawesi 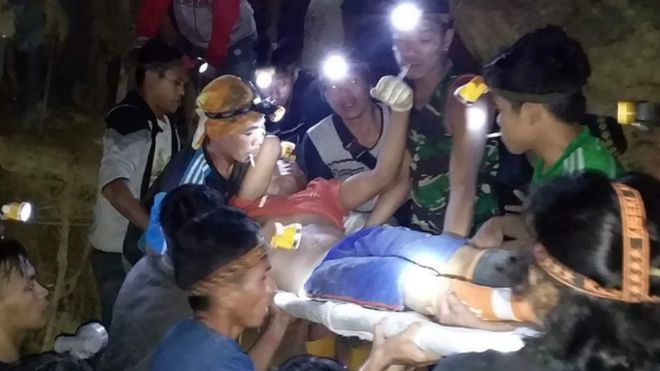 At least 60 people are feared to have been buried by a landslide at an illegal Indonesian gold mine.

Rescuers are searching for survivors at the site, in the Bolaang Mongondow area, on the island of Sulawesi.

A spokesman said supporting beams gave way at the mine “due to unstable land and numerous mining shafts”.

“It is estimated that as many as 60 people are buried under landslide and rock material,” the agency said.

Images from the scene showed rescue teams and local people working through the night to carry survivors off a mud-covered hillside.

Small-scale gold mining is banned in Indonesia, but remains widespread in rural areas. Lack of regulation and the poor construction of makeshift mines means accidents are relatively frequent.

Campaigners have long argued that a lack of local employment opportunities meant people felt forced to rely on illegal mining.

Buhari and Osinbajo Thank Nigerians For Their Re-election