Fast Food May Now Be Worse For Our Health — New Study Warns. 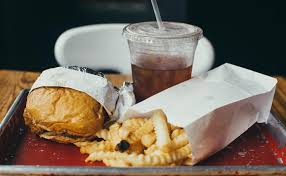 Filled with empty calories and ultra-processed, fast food may increase the risk of obesity and cancer. While fast-food chains have ostensibly been trying to offer more healthful options, a new study finds that the health impact of their menus has not improved — to the contrary, in fact.

Fast food may now be worse for our health, a new study warns.

Data from the Centers for Disease Control and Prevention (CDC) indicate that, between 2013 and 2016, 36.6 percent of adults in the United States ate fast food on any given day.
Moreover, according to a study conducted by University of Connecticut researchers in 2018, around 74 percent of parents purchase unhealthful foods for their children in fast-food restaurants.

This, the investigators noted, is despite the fact that, from 2013 onward, some of the most popular fast-food chains committed to offering more healthful options in their children’s menus.

Now, a new study suggests that most fast-food restaurant menus have not, in fact, become more healthful overall, despite the addition of some arguably more wholesome choices.

The researchers analyzed the variety, portion size, and nutrition of entrées, sides, and desserts offered by 10 of the most popular fast-food chains in the U.S. over a period of roughly 3 decades, based on the menus they made available at three points in time: in 1986, 1991, and 2016.

In the study paper — which appears in the Journal of the Academy of Nutrition and Dietetics — the investigators explain their focus, noting that, “These restaurants were chosen because the nutritional information on the key nutritional variables of portion size, energy, and sodium were available for each of the 3 years being analyzed.”

“Given the popularity of fast food, our study highlights one of the changes in our food environment that is likely part of the reason for the increase in obesity and related chronic conditions over the past several decades, which are now among the main causes of death in the U.S.,” says lead investigator Megan McCrory, Ph.D.

Fast food still fuels chronic conditions
The researchers looked at how entrées, sides, and desserts changed on these fast-food restaurants’ menus over the 30-year span.

McCrory, an associate professor at Boston University in Massachusetts, and the team accessed the relevant data through The Fast-Food Guide, which was published in 1986 and 1991, and via resources available online for the year 2016.

First, the researchers observed that the variety of foods that these restaurants offered increased at a high rate of 22.9 items, or 226 percent, per year.

However, as the variety increased, so did the caloric content of the food items on offer, as did portion size.

“Our study offers some insights on how fast food may be helping to fuel the continuing problem of obesity and related chronic conditions,” the lead researcher concludes, adding:

“Despite the vast number of choices offered at fast-food restaurants, some of which are healthier than others, the calories, portion sizes, and sodium content overall have worsened (increased) over time and remain high,”Megan McCrory, Ph.D.

A long way to go for fast-food chains
McCrory and the team also note that four of the 10 fast-food chains also provided information on the calcium and iron contents of items on their menus over the past 3 decades.

The researchers acknowledge that the two essential nutrients — which play key roles in bone and blood health — are much more present in fast food now than they were 30 years ago.

However, McCrory stresses that fast food should not be the first port of call for people looking to increase their calcium and iron levels, since these nutrients are available in unprocessed or minimally processed foods, such as seeds, dairy products, and fish.

“The requirement that chain restaurants display calories on their menus is a start. We would like to see more changes, such as restaurants offering smaller portions at […] proportional prices,” she adds.

How much sugar is in your food and drink?
People in the U.S. are estimated to consume 2–3 times the recommended daily amount of sugar. A diet too high in sugar increases the risk of obesity and several other conditions with widespread consequences. Many of us are unaware of how much sugar we are eating. Learn about the sugar contents of common foods here.

FCTA lnaugurates Committee on Alleged Negligence Of Patient In Hospital