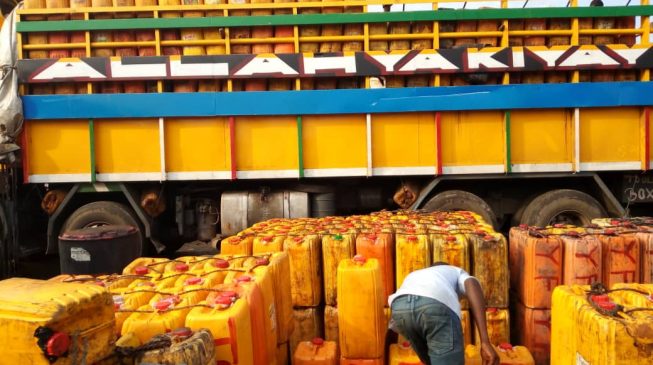 The National Palm Produce Association of Nigeria (NPPAN) has raised alarm over downward slide in price of Crude Palm Oil (CPO) and local demand in spite of their huge investments.
The group raised the alarm in a letter jointly signed by Mr Dele Olanubi, NPPAN Ambassador, Mr Bolarinwa Adetula, Chairman Ondo Chapter and Chief Abiodun Adejo, Oyo State Coordinator.
The letter, addressed to President Muhammadu Buhari and entitled `SOS to the Federal Government on illegal entry of Crude Palm Oil (CPO) into Nigeria’, hinged the problem on illegal entry of CPO into Nigeria.
It complained about seamless corruption at the borders, saying such had allowed smuggled palm oil into the country at the detriment of huge local investments.
“Many of us who heeded calls by the Federal Government in the last three years for private intervention in the oil palm industry are at the risk of losing billions invested in the sector.
“Virtually all of our businesses are at the verge of collapse because of unbridled corruption culminating in smuggled palm oil into Nigeria due to porous borders.
`Also, banks have tightened the noose around the investors over unsettled credits and loans running into billions of naira.
“The jobs of millions of Nigerians are at stake if immediate positive steps are not taken to stop illegal entry of Crude Palm Oil (CPO) to Nigeria before it is too late,’’ the group said.
NPPAN said that the country was currently losing more than $500m worth of palm oil annually owing to worsening situation in the industry affecting local production.
“Our members had taken the risk to obtain loans running into billions of Naira from commercial banks and micro-finance banks to reactivate abandoned plantations.
“CPO output increase tremendously within the last 24 months. The price was stable at N300,000 to N350,000 per metric tonne within the last 18 months up to October 2018.
“Since November 2018, we have noticed a downward slide in the price of CPO. In January 2019, we have the price drop to between N220,000 and N240, 000 per metric tonne, even when the February to June season is yet to commence.
“We then wonder what the price would look like during the season, when CPO production is at peak. The local demand has waned,’’ it said.
It said that buyers from the northern part of the country were no longer seen in the CPO producing states of the South, wondering if CPO was no longer used by industries or domestically in such places.
The association recalled that Mr Godwin Emefiele, the CBN governor, had once raised similar alarm over the increasing threats to investments of critical stakeholders in the sector.
The group also made reference to the early 1950s, when Nigeria controlled 43 per cent of the global market and derived 82 per cent of its export revenue from the sector.
It said that Malaysia and Indonesia, the two leading palm oil producers now, obtained the seedling from Nigeria at the time it was the number one palm oil-producing nation in the world, regretting, however, that their human and capital outlays were currently threatened by increasing hostile business climate.
“Three years down the line of the life of this administration, we were called upon to go back to the land to produce food and agro-allied input for our industries so as to give life to our economy.
“Our association mobilised all its members to go back to all abandoned plantations and also encouraged the planting of new fields so as to increase the palm oil output of Nigeria.
“The effort was to also reduce the outflow of hard foreign exchange and unemployment. Today, we got little or no leverage from the government.
“Critical among the expected leverage from the government are bank loans to our members nationwide,’’ the letter reads in part.
(NAN)
Previous Article