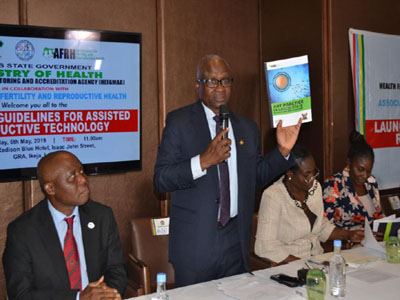 Commissioner for Health in Lagos State, Dr. Jide Idris has unveiled new regulations and guidelines to guide assisted reproductive technology practice in the State to ensure the processes are safe and effective.

Idris, speaking at the launch of the new policy document at  Ikeja said that the guidelines came into existence as a result of the collaborative efforts of private practitioners in fertility medicine and experts in the public sector.

He explained that the need to protect members of the public from falling prey to quacks who parade themselves as experts in fertility medicine prompted the Government to intervene.

The Commissioner recalled that the State Government, since 2017, has been involved in several enlightenment and sensitisation campaigns to educate the populace against falling prey to quacks who feign as professionals.

“As a responsive and responsible government, we have decided to intervene to stem the tide in order to bring sanity to this aspect of medical practice in the State. There is a need for us to regulate the practice. We need to restore sanity and to protect the citizenry”, he affirmed.

Going down memory lane, the Commissioner explained that the determination of the State Government to actively participate in the use of advanced procedures, technologies and research for evidence-based management of medical conditions prompted it to inaugurate a Committee in 2013 to conduct a literature and desk review on advanced medical procedures and research in the State.

He stated that another committee was constituted in the same year to review the recommendations of the committee on the advanced medical procedure as well as carry out research on In-Vitro Fertilization (IVF) and surrogate motherhood.

The extensive research and consultations with relevant stakeholders, Idris said, culminated in the new regulations and guidelines.

While commending all contributors to the birth of the document, Idris assured that the guidelines would go a long way in protecting patients and their children, allay public concerns and help in guiding the practice.

He advised that a periodic review of the document is necessary to align with new developments in ART practice in the world.