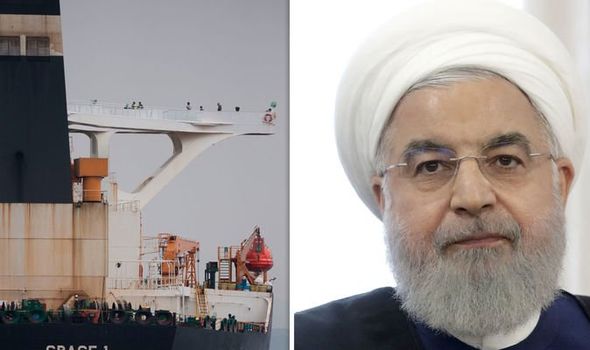 IRAN has threatened the UK it will “face the consequences” if it does not release an oil tanker it seized in international waters.

The tanker was taken over amid suspicions it was carrying oil to Syria and breaking EU sanctions.
According to Tasnim News Agency, the timing of the capture comes as tensions between Iran and the West increased after it announced it would break the terms of a nuclear deal on the amount of uranium enrichment it had.

 
On Monday, Mr Raeisi said: “It seems that the British and the Europeans are well aware of the Islamic Republic’s means of access and capacities.

“Accordingly, it would be in their best interests to immediately release the oil tanker, otherwise, they’ll have to face the consequences of the move.”

 
Reports say the Iranian vessel was travelling in accordance with international law before it was taken over.

The vessel was then captured by British Royal Marines in Gibraltar on Thursday.

 
The tanker was taken over amid suspicions it was carrying oil to Syria and breaking EU sanctions.

After the incident Mohammad Javad Zarif, Iran’s foreign minister, said the UK’s action had set “a dangerous precedent and must end now”.

He added: “Iran is neither a member of the EU nor subject to any European oil embargo.

“Last I checked, EU was against extraterritoriality.

“UK’s unlawful seizure of a tanker with Iranian oil on behalf of the B-Team is piracy, pure and simple.

Iran has continually denied the vessel was heading to its ally Syria.

However, Gibraltar says it had reasonable grounds to feel the Grace 1 ship was carrying crude oil to the Baniyas refinery in Syria.

IVF ‘mix up’: US Couple Say They Gave Birth To Wrong Children