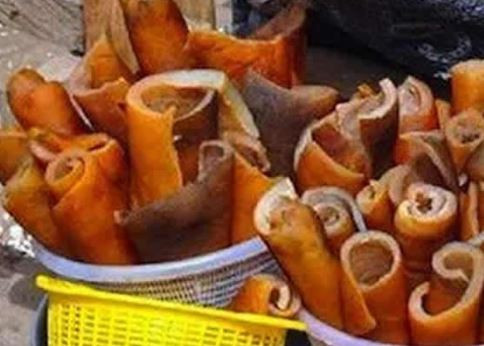 The Lagos State Government has confiscated a truckload of “Toxic Ponmo” at Ijegun, a suburb of Lagos in the Alimosho Local Government area of the State.
The Ponmo was imported into the country by some unscrupulous individuals.
Permanent Secretary, Lagos State Ministry of Agriculture, Dr. Olayiwole Onasanya, who disclosed this in Lagos  noted the Police in Ikotun area of the State made the arrest of a vehicle fully loaded with cowhide, otherwise known as “ponmo”, and subsequently informed officials of the State Government.

He pointed out that the cowhide preserved with certain chemicals for the purpose of being used as leather material are being sold for human consumption by some criminals prior to their arrest by the Police and subsequent confiscation by the State Government.

The Permanent Secretary noted that the confiscated “toxic ponmo”, suspected to contain substances that could spread the Ebola virus, has since been transported to the Ministry’s outstation at Johnson Agiri Office Complex, Agege for onward disposal at the medical waste dumpsite in Ewu Elepe, Ikorodu area of the State.

Dr. Onasanya explained further that other relevant agencies such as the Lagos State Waste Management Authority (LAWMA) and Environmental Health Officers have been duly informed of the discovery and the disposal exercise.

He reiterated the commitment of the State Government to step up its monitoring activities with a view to further fishing out the existence of any “toxic ponmo” in the Lagos markets.

He, however, called on members of the public to be vigilant and report any suspected activities and sales of unwholesome foods to the nearest local government in the State or the State Ministry of Agriculture.

The Permanent Secretary also advised members of the public against the purchase and consumption of food whose sources are doubtful or perceived to be harmful to human health and well being.

Recall that about 30 tonnes of the dangerous “ponmo’ were seized by the State Government earlier in the year.

At least 13 doctors have tested positive for coronavirus (COVID-19) in Ghana, an official of…