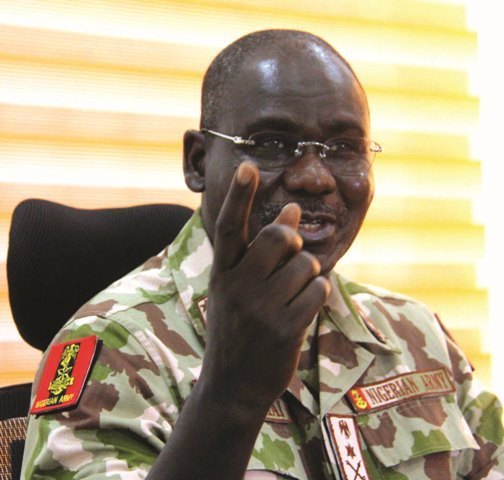 The Chief of Army Staff Lt General Tukur Yusufu Buratai has charged officers and men of the Nigerian Army on the need to be mentally and physically alert for them to be able to discharge their duties deligently.
According to a press statement signed by  Acting Director Army Public Relations , Colonel  Sagir  Musa ,  Buratai gave the charge
at the climax of The Nigerian Army 10 kilometers Monthly Route March for September 2019 at the Guards Brigade Headquarters, Aguiyi Ironsi Cantonment, Abuja.
Represented by the Chief of Policy and Plans Army, Lt Gen Lamidi Adeosun, Buratai urged troops to maintain the spirit of momentum throughout the month of September and beyond in their offices and respective places of duty.

According to him, – “We should not forget our calling as officers and soldiers. Discipline is the watchword. Anything we do without discipline will not only rubbish whatever we are as individuals, body or as an institution, so we keep up our discipline, dedication, regimentation and physical well being to face our duties seriously as expected of us.”

He called on soldiers not to be caught on the wrong side of the law on no account while doing everything possible to maintain the integrity, image and reputation of the Nigerian Army.

We Will Support LASU to Facilitate Research Studies– LASG

Buhari: I’m not bothered about defections in APC