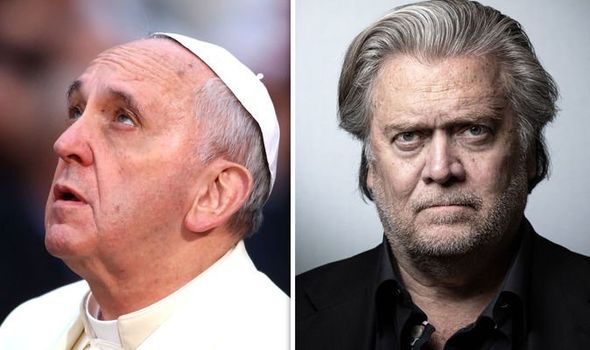  
POPE FRANCIS is under threat in the Vatican as his predecessor Pope Benedict XVI – along with the traditionalist wing of the Catholic Church backed by former Donald Trump strategist Steve Bannon – look to undermine his Papacy, according to journalist Wayne Madsen.

 
Wayne Madsen, in his article for Strategic Culture Foundation, outlines that Francis’s enemies have challenged his authority due to his differing approach.

Mr Madsen says that when Francis vowed to clean up the Church of paedophile priests, he was charged by his right-wing enemies, including, Benedict, Maria Vigano, Raymond Burke, Steve Bannon, Opus Dei, the Franciscan Friars of the Immaculate, of tolerating paedophiles and homosexuals in the church.
Francis has attempted to thwart corruption in Vatican City, where corporate cash is frequently funnelled to dodge regulations and tax.
As Mr Madsen highlights, on October 1, 2019, Francis ordered Vatican police to seize documents, computers, and portable electronic devices from the Vatican Secretary of State and the Financial Information Authority, the latter the financial watchdog of the Vatican.

 
In addition to these two offices, Francis has also placed the Institute of Religious Works (IOR), the so-called “Vatican Bank,” under increased supervision and control.

The IOR has been misused in the past for a number of covert operations, including the funding of several right-wing CIA-linked terrorist groups and death squads in Latin America.

 
Mr Madsen notes that Francis was also instrumental in denying former Donald Trump advisor Steve Bannon the use of a 13th century monastery on May 31, the Certosa di Trisulti in Collepardo in central Italy, as a training academy for neo-fascist political operatives from around the world.

Bannon’s Brussels-based international “neo-fascisti” grouping, called ‘The Movement’ had made a deal with a group connected to Burke, the Institute of Human Dignity, to lease the 800-room monastery for political training.

Christian news Francis has proved a divisive but revolutionary figure (Image: getty)
The school proposed by Bannon was, in Francis’s view, a blatant targeting of his papacy and the progressive values that derive from it.

He was able to thwart the plans as it was discovered the guarantor lease for the school was forged, and therefore blocked by the Italian Ministry of Heritage.

Since the resignation of Pope Benedict in 2013, Pope Francis has cut both a revolutionary and divisive figure in the Catholic Church, breaking from various traditional approaches that the Church had become accustomed to.

One of the unorthodox features of the current Pope’s tenure is his appointing of cardinals from less notorious churches spanning further across the globe.

Just this week, cardinals from less established countries in the Catholic Church such as Morocco, the Democratic Republic of Congo and Lithuania were appointed.

The move is unconventional given that previous Popes have appointed cardinals from more renowned churches in Europe and North America.

Francis has now appointed more than half of the 128 cardinal electors, increasing the possibility that his successor will continue his progressive policies.

His critics have grown impatient with this policy with Benedict demanding he remain domiciled in an apartment on Vatican grounds amid his own doubts of Francis’ methods.

With some dubbing him a populist, and others lauding him as a progressive, Pope Francis has shaken up the status quo in the Vatican, making it more political than perhaps it has ever been before.