China Overtakes US In Rankings Of World’s Richest People 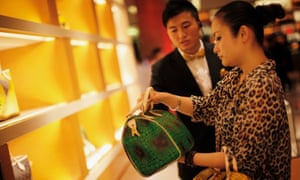 The number of wealthy Chinese people has overtaken the number of rich Americans for the first time, according to a report by Credit Suisse.

The bank’s annual wealth survey found there were 100 million Chinese people among the world’s top 10% of richest people, compared with 99 million in the US.

The report says the “rapid transformation of China from an emerging nation in transition to a fully fledged market economy” helped create a record number of rich people.

 
“Despite the trade tension between the United States and China over the past 12 months, both countries have fared strongly in wealth creation, contributing $3.8tn and $1.9tn respectively,” said Nannette Hechler-Fayd’herbe, the global head of economics and research at the Swiss bank.

Personal savings of $109,430 (£83,630) are required to be part of the top 10% of the world’s richest people. While China has overtaken America at this level, the US is still ahead when it comes to the super-rich, accounting for 40% of the world’s millionaires.

The number of dollar millionaires in the US increased by 675,000 last year to 18.6 million. This means about one in 14 adults in America is a millionaire.

 
The Brexit-led decline in the value of the pound caused the number of UK millionaires to drop by 27,000 to 2.46 million. The UK held on to fourth place in the global league table behind the US, China and Japan with 3 million millionaires – 5% of the global total.

Commenting on the UK, the authors of the report said: “The outlook is now uncertain, with future prospects depending very much on what happens in terms of Brexit.

“Our estimates indicate a rise of 2.2% in wealth per adult from the end of 2018 to mid-2019. However, both the stock market and exchange rate showed increased volatility over the summer, reflecting the heightening of Brexit worries.”

Across the world, a further 1.1 million people joined the millionaire club taking the total to 46.8 million. Collectively, they own $158.3tn in net assets, 44% of the global total.

The report estimates 55,920 adults are worth at least $100m and 4,830 have net assets above $500m. Net assets are defined as realisable savings minus debts and does not include the value of property.

Credit Suisse forecast global wealth – which increased by 2.6% over the past year – would rise by 27% over the next five years to $459tn by 2024. The number of millionaires is expected to grow over this period to almost 63 million.

Don’t believe the hype about millennials and money, data suggests
Anthony Shorrocks, an economist and author of the report, said: “With almost two decades of data at our disposal, we can see two distinct phases of wealth growth. The century began with a ‘golden age’ of robust and inclusive wealth creation. But wealth growth collapsed during the financial crisis and growth never recovered to the level experienced earlier.

“There was a seismic change at the time of the financial crisis, when China and other emerging market economies took over as the engine of wealth creation. Meanwhile, the United States has maintained an astonishing 11-year spell of increasing wealth per adult.”

 
The report says millennials – those born between the early 1980s and the late 90s – are the least well-off age group.

The report says: “Not only were they hit at a vulnerable age by the global financial crisis, its associated recession and the poor job prospects that followed, but they have also been disadvantaged in many countries by high house prices, low interest rates and low incomes, making it difficult for them to buy property or accumulate wealth.

“Studies in several countries have indicated that the millennials can expect to be worse off than their parents.” (Guardian)

Lab-Grown Meat Could Be On Shelves In 5 Years — Scientists