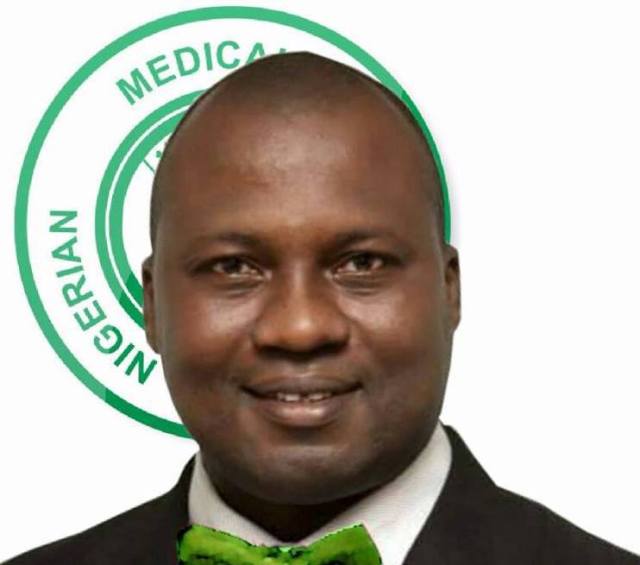 Dr Francis Faduyile,  National President, Nigeria Medical Association (NMA),  has said that with about 3,000 doctors graduating yearly, it would take about 25 years to produce the adequate number of doctors to cater for Nigeria’s population.
Faduyile said this at the Annual Symposium of the Health Writers Association of Nigeria (HEWAN),in Lagos  with the theme – ‘Curbing the High Rate of Brain Drain in the Nigerian Health Sector ‘.
He said that there was huge deficit in the nation’s health sector due to brain drain as some of the best healthcare practitioners were leaving the country through migration to more favourable countries.
“Nigeria is losing some of its most educated, talented and professional healthcare practitioners to countries such as Namibia, Senegal,  Ghana, U. K, South Africa and many others.
“This is because government is not interested in giving adequate priority to health,  low funding, no appropriate employment, low remuneration, lack of equipment to intervene and save lives,  insecurity, bad roads and other problems.
“Now it is taking a toll on the country as our people are suffering due to shortage of workers,  people die due to lack of effective healthcare system and Nigeria has one of the worst health indices  in the world, “he said.
Faduyile said that the few healthcare practitioners in the country were overwhelmed as a doctor caters for about  10,000 to 22,000 patients instead of a doctor to 600 patients as recommended by the World Health Organisation.
He said presently,  the nation’s education institutions graduates about 3,000 doctors yearly and with such number it would  take about 25 years  to produce the adequate number of doctors required to cater for Nigeria’s increasing population.
“Like in the UK where many of our doctors are migrating to,   the ratio of doctors to the populace is about zero point eight, meaning that they have so many doctors, whereas,  Nigeria is in deficienct when it comes to number of doctors,  “he said.
The NMA President urged journalists to  report the problems in the health sector objectively to make government accountanble and make things right.
Also speaking,  Dr Anthony Omolola, a former President of the Association of Private Medical Practitioners of Nigeria, said there was the need to declare a state of emergency in respect to the inadequate number of doctors in Nigeria.
Omolola said that it was disheartening to note that with about 72,000 registered doctors, less than half practice in Nigeria.
“We need committed leadership to curb the challenge of brain drain in this country. Government need to increase budgetary allocation to health and invest hugely in the private sector.
“The education sector is the bedrock to make our healthcare system function optimally, “he said.
In his remarks, Dr Sam Ohuabunwa, President, Pharmaceutical Society of Nigeria (PSN), said the media had a role to play and urged them to collaborate with with healthcare professionals in form of advocacy for better healthcare delivery in Nigeria
He also called for the education of prospective healthcare practitioners on the need to stay and practice In Nigeria to fill the huge deficit in the health sector.
Previous Article

Psychiatrists Bemoan High Rate Of Suicide In Nigeria, Identifies Lack Of Prevention Programmes As Major Cause

Endometriosis : Save the Adolescents