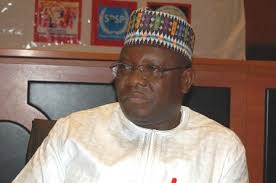 In a statement signed by Musa Mato
Head of media IPCR, the institute said that, “the publication is mendacious and does not reflect the official position of the Institute, it could only be an expression of personal opinion by the researcher.”

The report which was published in one of the national dailies titled “security agents impregnating teenagers in border communities”, was made by a Senior Researcher of the Institute who was at Oke-Odan, a border community in Yewa South Local Government Area of Ogun State on an official assignment.
The Director of the institute therefore emphasized that the officer who made such unverified claim has been sanctioned accordingly by the Institute for the misrepresentation.
Bakut maintained that it is part of the IPCR mandate to interact with communities and explain the importance of peace in the society, he added that expression of personal opinion at a public fora is seriously frowned upon by  the Institute.
The Director General of the Institute has  therefore called on the general public to disregard the information in such publication as it does not represent the official position of the Institute.

The Inspector General of Police, IGP M.A Adamu,  has cautioned officers and men of the…