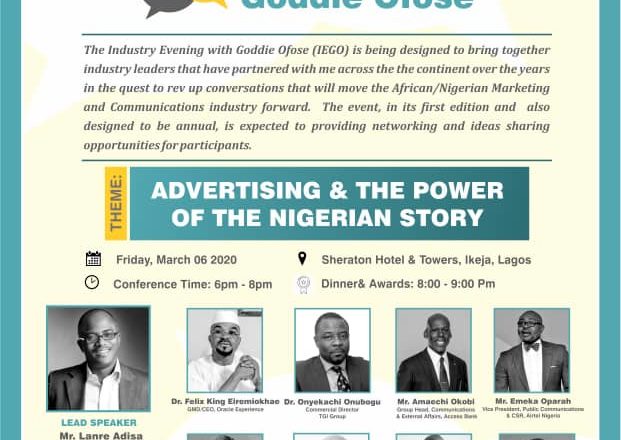 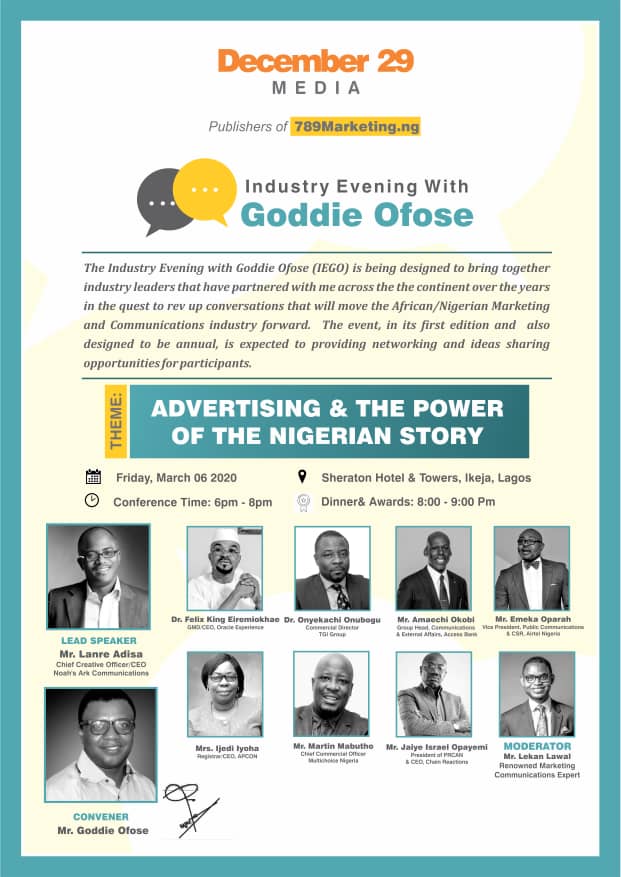 Top Integrated Marketing Communications, IMC stakeholders are set to discuss ‘Advertising And Power of Nigerian Story’ at an Industry Evening organised by one of Nigeria’s top brand analyst and journalist, Mr Goddie Ofose.

The Industry Evening which aims at massively accelerating growth in Nigeria’s marketing communications industry and propeling all-round relevance of the industry in the country’s development will take place on March 6, 2020 at the Sheraton Hotel and Towers, Ikeja, Lagos.

Gboyega Akosile, Chief Press Secretary to Lagos State Governor, Mr. Babajide Sanwo-Olu, will be the special guest of honour at the occasion.

The lead paper for the evening will be presented by Mr. Lanre Adisa, chief creative officer, Noah’s Ark Limited.

The Industry Evening, according to Ofose, was designed “to bring together industry leaders that I have interacted with over the years in the quest to rev up conversations that will move the Nigerian Marketing and Communications industry forward”.

Ofose also believes that with theme of the night, -Advertising and the Power of the Nigerian Story- the speaker, panelists and all other stakeholders present will explore the overriding engagement benefits derivable in deepening the Nigerian social-cultural content in advertising.

The programme, which is scheduled to be an annual event will attract stakeholders in Nigeria’s marketing communications industry, corporate organisations, young practitioners and students from selected universities and other higher institutions in the country.

The convener felt that weaving the conversation round the Nigerian story will not only deepen the evening’s conversation but will equally throw up ideas that will bolster the corporate image of brand Nigeria and raise the national consciousness of industry players, young practitioners, students and other stakeholders in all ramifications. 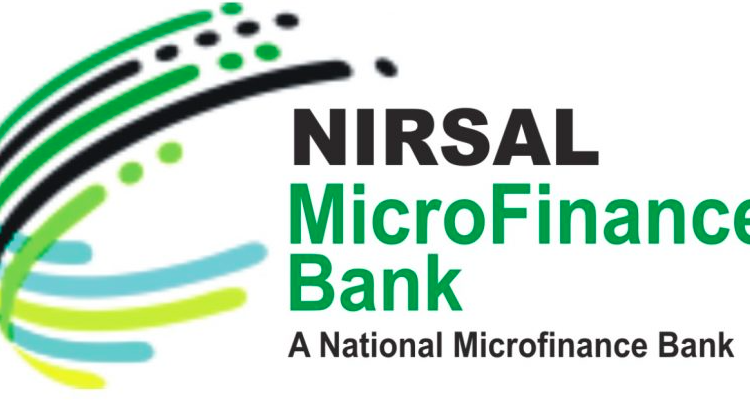 Farmers, Manufacturers, Others Get N18bn Loan From NIRSAL In 2019

In 2019, a total of N18 billion was disbursed to not less than 5000 applications from Farmers, Manufacturers and Fashion Designers who applied for loans by the NIRSAL Micro Finance Bank.

According to Kure, a review of the performance of NIRSAL MFB showed it had been able to impact on the lower segment of the society.

He said the bankers committee has also been able to support the bank by increasing its paid up capital to N7.5 billion, thereby adding N2.5billion. This, he said will enable the bank in its expansion plans across the federation.

In the past year, NIRSAL says its branches are now in 53 locations in the country. The bank’s chief assured that the plans to work with NIPOST offices across the country are still underway. This branches, he said, will be upscaled and used as a front for further disbursement of the loans.

The loans he said will be targeted to the lower sector of the economy’s pyramid. It will be targeted at Small and Medium Enterprises (SMEs) in agricultural and manufacturing sector so as to enable poverty alleviation, generate employment to ensure overall growth in the economy, he said.

Other issues addressed at the committee meeting and revisited with the press included the success of the Loan to Deposit Ratio of commercial banks reviewed to 65 percent last year.

Segun Agbaje, MD Guaranty Trust Bank said the upward review of the LDR is a good development as credit is needed to stimulate any economy. “It is one of the most successful things done in 2019, especially when we look at how much credit disbursed in the last 6 months. He added that consumer credit now averages 10 percent of loan books of Nigerian banks. For Guaranty Trust Bank, this translates to about N150bn for the 2019 financial year.

Bello Hassan, director banking supervision, added that the CBN is proactive is managing the risk associated with increased lending. “The CBN has brought out the global standing instruction, aimed at encouraging good credit repayment in the system, Hassan said. Adding that with this instruction, a customer who defaults in payment has empowered the bank to look through the system and use deposits in any other bank in offsetting such outstanding obligations.

Representatives of the bankers committee also mentioned that they were considering a request of the government to assist in bridging the infrastructure gap in the country.

Hassan said the government extended a request to the committee of banks, encouraging them to participate in bridging the infrastructure gap in the country.

Hamdah Ambah, MD FSDH merchant bank explained that a committee of bank CEOs have been formed to address this request.

“We understand that government alone can’t provide all the infrastructure in the country, we in the private sector have to work hand in hand to ensure the infrastructure moves ahead, so we agreed to create a small committee among the bank CEOs to work with the Central Bank and identify the roads we will like to participate. We will come up with a framework and share with government how we intend to do it,” Ambah said. 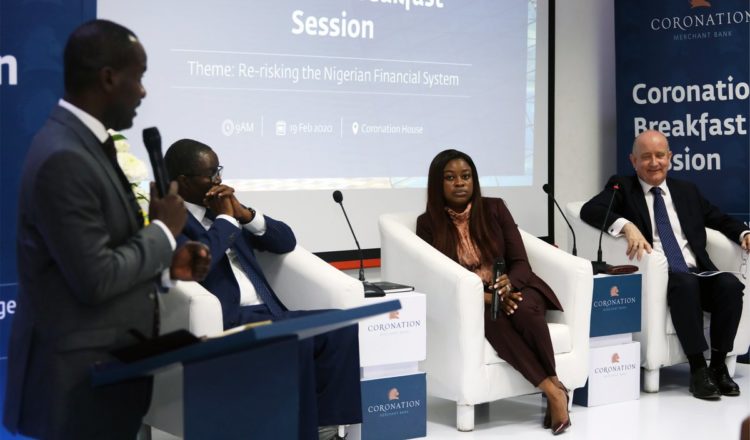 At Coronation Breakfast Session, Analysts Say No Devaluation Of Naira This Year 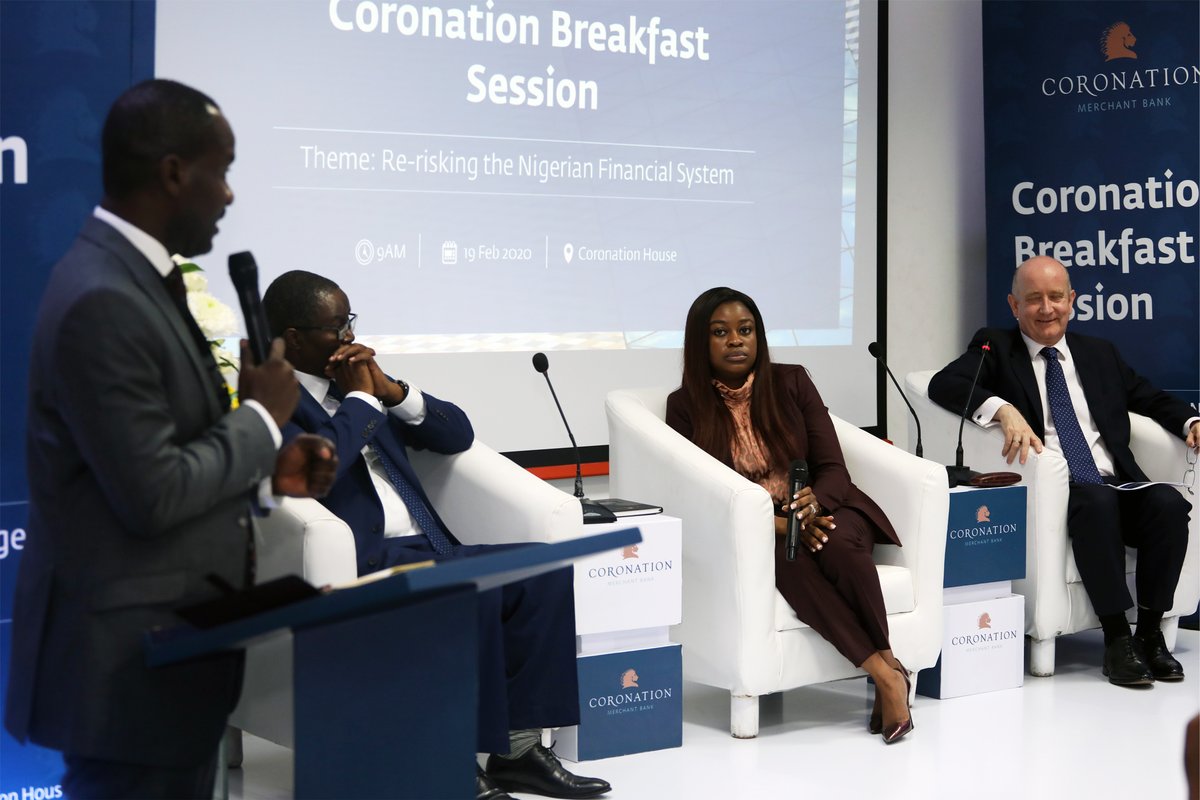 The naira devaluation, low yield on Treasury bills,  among others were resolutions reached at the Coronation Breakfast Session with the theme: “Re-risking the financial earch, Coronation Asset Management Mr. Guy Czartoryski, , expressed optimism that the CBN had strategically mapped out economy policies that would ensure exchange rate stability in the country.

He expressed that the apex bank would keep the exchange rate at close to N362.50 per a dollar for most of this year.

“The recent history of the Naira/US dollar exchange rate shows that 20 per cent over-valuation of the Naira, in terms of fair value, is associated with devaluation. Such a level may be reached during 2021, but the risks of this happening in 2020 are low.”

He noted that bank earnings may suffer somewhat from the CBN’s initiative to limit the scope of card charges.

He noted that “this will likely be offset by balance sheet expansion and a degree of interest rate protection from high-yielding securities.

“If you look at where we are today, if you look at output on month-to-month, I think we are well positioned to weather this year. To put a caveat to it, we are looking at the short-term, we are speaking for just 2020, we are not speaking into 2021,” she said.

According to her, the apex bank had already put in place strategies to ensure naira stability such as issuance of Euro Bond and bilateral loans, among others.

Sorae stated that the $3.5 billion eurobond that would be issued when concluded would boost the nation’s foreign reserve and help in mitigating currency risk.

“The eurobond that is going to be issued, they are currently on a road show that should happen probably before the end of the first quarter or early in the second quarter.

“The $3.5billion eurobond would add to the nation’s reserve, if you look at where we are, we are about $36 billion and if you add the eurobond money it will take the reserve to about $39 billion.

“We can decide to take bilateral loans from the likes of the World Bank and IMF.

“We can decide to take these loans and if we are taking the loans in tranches of a billion, two billion it then means that foreign exchange reserve at the end of the day might be comfortably be sitting at $40 billion.

“If we get $40 billion in reserves do we see a devaluation. It’s based on these statistics that we are saying for this year, we think CBN is on the right foot as regards the currency,” she added.