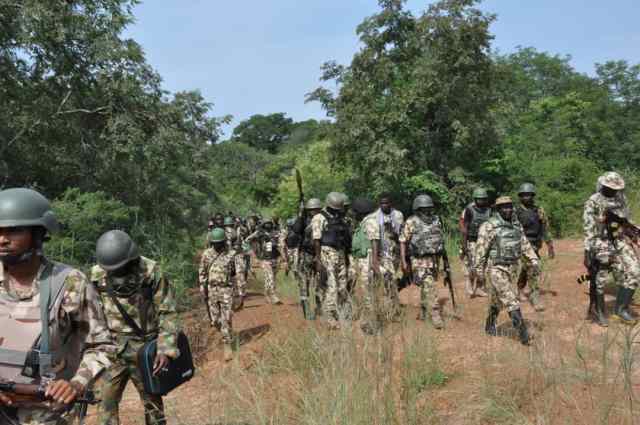 He said that a successful sting operation conducted by troops of the 26 Task Force Brigade led to the arrest of the suspects.

According to him, many of those arrested have been identified to have operated combat vehicles during the infamous Boko Haram attack on Gwoza in 2014.

“It is gratifying to note that one of the arrested suspects, Alhaji Bukar Modu is Serial 89 on the high profile Boko Haram leaders wanted list published by the authorities of the Nigerian Army,’’ he said.

Iliyasu said that the troops of the Nigerian Army had stepped up operations nationwide to checkmate the activities of criminal, adding that various operations had yielded results.

According to him, efforts are on to identify the owners of the stolen livestock for eventual release to them.

Iliyasu further said that five herdsmen complicit in the murder of one Haliru Yahaya on his farm in Birniwa in Jigawa, were arrested in a joint operation by the army and police.

The operations spokesman said that the arrested suspects were currently in the custody of the Nigeria Police in Birniwa while troops maintain vigilance in the area to forestall any escalation.

According to him, notorious armed robbers and kidnapers, vandals and oil bunkers were also arrested in Edo, Ondo, Ogun, Plateau, Delta and Rivers states in different operations of the army.

“In the light of the above, the Chief of Army Staff, Lt.-Gen Tukur Buratai wishes to thank all patriotic citizens for availing the Nigerian Army with useful information leading to the successes so far recorded.

He also congratulated and admonished the troops  to keep  the pressure on the insurgents and their collaborators up ,” Iliyasu said.