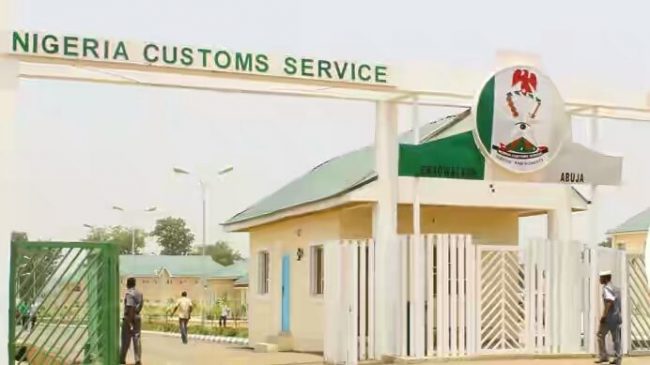 The Customs Area Command of the Command, Comptroller Aliyu Galadima Saidu said that a total of 24 seizures with Duty Paid Value (DPV) of one billion, two hundred and seventy-eight million, seven hundred and eight thousand and eleven naira (₦1,278,708,011.00), were also recorded in the area of anti-smuggling.

The seizures were made due to wrong documentation, false declarations, wrong classifications, concealments and non provision of end user certificates for the imported machetes.

Preliminary investigations carried out by the Service revealed that the primary motive for the items being smuggled was to evade paying the correct duties.

Comptroller Saidu, who frowned at the continued menace of smuggling across the ports and borders, also lamented on the detrimental effect it has on the nation’s security, social and economic well being.

He advised those involved in such unpatriotic behavior to desist from it, and warned that the command will not spare anyone as efforts will be intensified in locating and investigating the economic saboteurs, no matter how they hide.

He also urged genuine business men to continue being law abiding and run their businesses with utmost compliance with the law as a way to build trust and integrity in their dealings.

Saidu also expressed appreciation to the Comptroller–General of Customs, Col. Hameed Ibrahim Ali (Rtd.) and his management team for their consistent encouragement and support; while reassuring continued resilience and diligence of officers and men of the Command in carrying out all statutory responsibilities without compromise.

He extends a hands of fellowship to stakeholders including sister agencies, the business community and other organizations, thanking them for their support and cooperation with the command, while commending the resilience and diligence of all the officers last year. He also urged that the effort be sustained and improved upon.

He equally thanked members of the press for their continued partnership with the command, and assured of an open door policy for conveying information to the public.

Saidu said, “2019 has come and gone. I want to commend you all for your effort in revenue collection, trade facilitation and anti-smuggling. We can do better than we did last year by staying more vigilant against smuggling, duty evasion, concealment, under declaration and other unlawful acts.”

“Those involved in trade related malpractices will be looking for ways to beat the system, but we have deployed our trainings to productivity through diligent profiling, uncompromising examination, improved trade facilitation, strategized intelligence and tact exhibition for this year 2020 and beyond.”

Breakdown of seizures made in 2019: