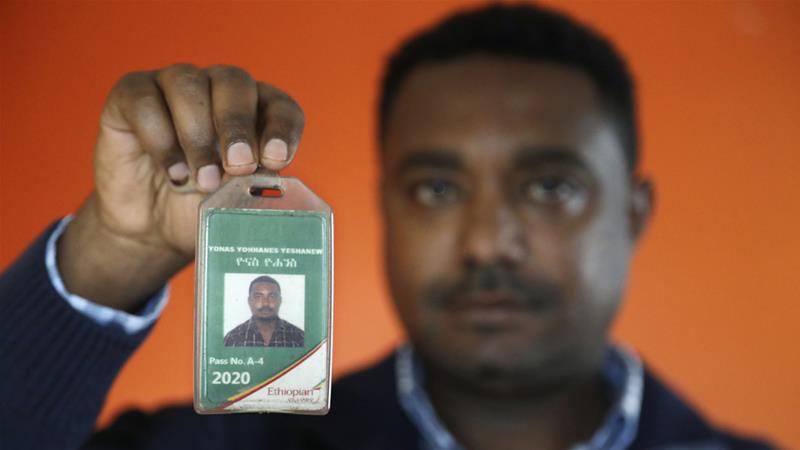 Ethiopian Airlines’ former chief engineer said in a whistleblower complaint the carrier accessed the maintenance records of a Boeing 737 Max jet a day after it crashed this year, a breach he contends was part of a pattern of corruption that included fabricating documents, signing off on shoddy repairs, and even beating those who got out of line.

Yonas Yeshanew, who resigned last summer and is seeking asylum in the US, said while it was unclear what, if anything, in the records was altered, the decision to go into them at all when they should have been sealed reflected a government-owned airline with few boundaries and plenty to hide.

“The brutal fact shall be exposed… Ethiopian Airlines is pursuing the vision of expansion, growth and profitability by compromising safety,” Yeshanew said in his report, which he gave to The Associated Press after sending it last month to the US Federal Aviation Administration and other international air safety agencies.

Yeshanew’s criticism of Ethiopian’s maintenance practices, backed by three other former employees who spoke to AP, makes him the latest voice urging investigators to take a closer look at potential human factors in the Max saga and not just focus on Boeing’s faulty anti-stall system, which has been blamed in two crashes in four months.

Ethiopian Airlines portrayed Yeshanew as a disgruntled former employee and categorically denied his allegations, which paint a blistering counterpoint to the perception of the airline as one of Africa’s most successful companies and a source of national pride.

Yeshanew alleged in his report and interviews with AP that Ethiopian was growing too fast and struggling to keep planes in the air now that it carried 11 million passengers a year, four times what it was handling a decade ago, including flights to Los Angeles, Chicago, Washington and Newark, New Jersey.

He said mechanics were overworked and pressed to take shortcuts to get planes cleared for takeoff, while pilots were flying on too little rest and not enough training.

Can Boeing weather the 737 Max storm?
He also produced an FAA audit from three years ago that found, among dozens of other problems, that nearly all of the 82 mechanics, inspectors and supervisors whose files were reviewed lacked the minimum requirements for doing their jobs.

Yeshanew included emails showing he urged top executives for years to end a practice at the airline of signing off on maintenance and repair jobs that he asserts were done incompletely, incorrectly or not at all. He said he stepped up his efforts following the October 29, 2018, crash of a Lion Air Boeing 737 Max in Indonesia that killed all 189 people on board.

One email Yeshanew sent to CEO Tewolde Gebremariam urged him to “personally intervene” to stop mechanics from falsifying records.

Those pleas were ignored, he said. And after the March 10, 2019, nosedive crash of an Ethiopian Boeing 737 Max outside Addis Ababa that killed all 157 people on board, Yeshanew said it was clear the mindset had not changed.

Yeshanew said on the day after the crash, Ethiopian’s Chief Operating Officer Mesfin Tasew openly agonised that the airline could be blamed because of its maintenance “issues” and “violations”, and he ordered that records on the downed Max plane be checked for “mistakes”.

“We pray to God that this will not point to our fault,” Yeshanew quoted the COO as saying.

That same day, Yeshanew said in his report, someone logged into the computerised maintenance record-keeping system, specifically on the records from the downed plane that detailed a flight-control problem – “a roll to the right” – that pilots had reported three months earlier. Yeshanew included in his report a screenshot of a directory of the records related to the problem that showed a final entry that was time-stamped March 11.

Yeshanew said he did not know what was in the records previously or if they were changed, only that the records were left to say that tests had been done and the issue had been resolved. While he doubted that the flight-control problem brought the plane down, he said any changes to the records would call into question the actual condition of the airplane at the time of the crash as well as the integrity of the airline as a whole.

Aviation experts say after a crash, maintenance records – specifically, log books and task cards containing notes by pilots and fixes by mechanics – are required by international air safety regulators to be immediately sealed off, and any attempt to manipulate them is a serious violation tantamount to trampling on a crime scene.

“If there is an accusation that you went into records, it means you’re hiding something, you have something to hide,” said John Goglia, a former member of the US National Transportation Safety Board and an expert in aircraft maintenance.

A deadly year for the aviation industry: What went wrong? | Counting the Cost
In its response to AP, Ethiopian denied a history of tampering and shoddy maintenance, and denied its COO or anyone else ordered someone to change the maintenance records on the downed 737 Max.

It said as soon as the accident happened, those documents were sealed, stored in a secure place, and delivered to Ethiopia’s Aircraft Accident Investigation Bureau. It added while “a technician tried to see the aircraft records” its review found no data was changed or updated.

The company confirmed Yeshanew served as director of aircraft engineering and planning but said he was demoted because of a “serious weaknesses in leadership, discipline and poor integrity”.

“He is a disgruntled ex-employee who fabricated a false story about Ethiopian Airlines, partly to revenge for his demotion while working in Ethiopian, and partly to probably develop a case to secure asylum in the USA,” the airline said. “We would like to confirm once more that all his allegations are false and baseless.”

Yeshanew and his attorney, Darryl Levitt, said that he was never demoted and, in fact, his steady rise through the ranks over a 12-year career at Ethiopian continued even into this year when he was tapped to oversee a new venture making aircraft parts and investigate two pilots who botched a landing in Uganda and nearly skidded into Lake Victoria. Yeshanew said his recommendations after that incident – fewer inexperienced pilots in cockpits and better training – went unheeded.

Among the allegations in Yeshanew’s report is that Ethiopian maintains a jail-like detention centre on the grounds of its Addis Ababa headquarters that it used to interrogate, intimidate and sometimes beat up employees who got out of line. Yeshanew said he knows of at least two mechanics beaten up in the past three years after falling out of favour with the company, and he feared the same fate awaited him.

Yeshanew said in the report and later interviews with AP that he was taken to the single-storey, dirt-floored detention center in July on suspicion he was talking to news organisations, and after 10 hours of questioning was told he would be thrown into jail “like all the other persons before” him if he didn’t keep quiet. He took that as a threat of torture.

“If you are in jail, it means you’ll be beaten, you will be tortured,” he told AP. “There is no difference in the current political system of Ethiopia.”

Four days later, Yeshanew fled to the US with this wife and two children and settled in the Seattle area.

A former spokesman for the airline union, Bekele Dumecha, told AP he met with more than a dozen workers over six years who had been beaten at the same detention centre, including one of the alleged victims identified by Yeshanew. Dumecha said he saw that person an hour after he was released, bruised and staggering.

“He couldn’t walk properly,” said Dumecha, who is now living in Minnesota and also seeking asylum. “He was mentally and physically destroyed.”

In its statement, Ethiopian Airlines denied that a detention center for torture exists and offered to show an AP reporter around the grounds. But after AP sought such a tour this past week, Ethiopian officials said it would take several weeks to arrange.

For the 39-year-old Yeshanew, the decision to become a whistleblower has come at a heavy price. He is leaving behind relatives and a job that he called “the dream of my life”, one with prestige and a big enough salary for him to buy a three-storey house. He is not sure of what kind of job he can get in the US, or if he will even be granted asylum.

Ultimately, he said, he has dreams of returning to his native Ethiopia and even going back to work at Ethiopian Airlines.

“I have to reveal the truth, the reality to the world, so that the airline will be fixed,” he said, “because it can’t continue like what it is doing now.”

Dangote Calls For More Contribution To The Country’s GDP