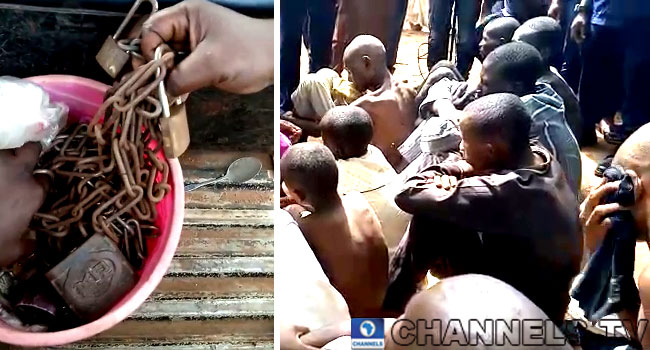 Officials of the Nigeria Security and Civil Defence Corps (NSCDC) have bursted two illegal rehabilitation centres in Kaduna State.The sting operation as was published by Channels TV, was carried out by operatives on the NSCDC on Tuesday morning in the ancient city of Zaria.

The facilities discovered are Limanchi Iya and Marmara Rehabilitation Centres.

During the operation, the security operatives rescued 11 people who were in chains, including an 11-year-old boy.

The NSCDC Deputy Commandant in Kaduna, Aloysius Nnegha, informed reporters that three people died in one of the centres while in custody.

He added that many of the victims suffer from acute malnutrition as a result of the dehumanised condition they were subjected to.

He also revealed that five operators of the centre were arrested during the operation.

Following the operation, the Deputy Governor of Kaduna State, Mrs Hadiza Balarabe, visited the NSCDC office in the state where the victims and the suspects were taken into custody.

Deputy Governor of Kaduna State, Hadiza Balarabe, speaks to rescued victims at the NSCDC office in the state.

The illegal centres were uncovered barely one month after security operatives raided two other facilities, both located in Rigasa, an agrarian community in Igabi Local Government Area of the state.

On September 27, it was reported how the police rescued over 300 persons including children chained together at an illegal rehabilitation centre.

The victims who were from different parts of Nigeria and Burkina Faso, Mali and other African countries, were subjected to the daily recitation of the Holy Quran and prayers, allegedly accompanied by torture.

This time, the state governor, Mr Nasir El-Rufai, personally monitored the early operation which was conducted on Saturday last week.

About 147 victims with some of them in chains were rescued from the facility, including 22 female victims who claimed to be sexually harassed.

photonews: Interactive Session with the Senate Committee on Capital Market at the National Assembly in Abuja