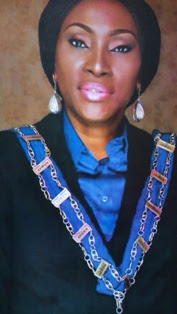 The Managing Director of the Nigerian Airspace Management Agency (NAMA), Capt Fola Akinkuotu has commended the ingenuity of women engineers in the country in ensuring stability in the system.

Speaking at the investiture of Engr.  Mrs.  Felicia Nnenna Agubata as the 15th President of the Association of Professional Women Engineers of Nigeria (APWEN), Akinkuotu described her as a woman of courage, patient and hard work that has transformed the system in the engineering department of NAMA within her few years in the agency.

Akubata, he said has remained persistent in her profession, stressing that the sky will be her limit.

The NAMA boss who was full of praises to see a woman excelling in the field dominated by male, assured women engineers of NAMA management’s support.

He added that in his flying days as a pilot so many women trainee pilots were under him.

He noted that  given the opportunity and enabling environment like other women just like Agubata, will continue to excel in their endeavours.

Akinkuotu commended the leadership and members of APWEN for the investiture of Agubata as their 15th president, noting that it was an honour well deserved.

In her speech, Agubata pledged to uphold the dignity of women engineers and to serve the entire engineering profession and humanity at large.

Agubata, who acknowledged the challenges ahead especially the expectations from the engineering community and stakeholders, assured that there would  be capacity and strength to mobilse necessary human and material resources to create value for the greatest good of the society in line with the mission of APWEN.

While  acknowledging the tough environment where women are regarded as the weaker sex, she vowed to remain focused as the profession does not recognize weaker sex.

According to her, “Just think about your mother and her toils in your growing up years and the picture the 21st century woman who still plays the traditional role of a woman with joy and yet acquired the necessary professional skills.”

Agubata stated that there was no research work that had shown conclusively that one gender was stronger or weaker than the other, adding that both sexes when given the exposures, training and orientation the outcome would be very interesting.

In her words, “to guarantee continuous progress, both sexes must complement and support each other. This will ensure that our potentials as one humanity is maximized across all spheres”

Agubata said APWEN will continue to encourage sound engineering practice and create avenue for women engineers to collaborate with professionals across all disciplines in the country and globally.

She disclosed that APWEN was  launched in 1983 with current membership strength at 3000 registered female engineers, noting that  the association has consistently contributed to the encouragement of the girl child in taking up sciences and mathematics to increase the prospects of studying engineering.

Agubata congratulated the immediate past President Engr. Hauwa Sadique for a successful tenure and vowed to follow up the good examples of her predecessor by bringing on board more value, energy creativity and innovation in APWEN activities.

The investiture ceremony was witnessed by dignitaries across the country.